16 fun facts about the Crested Crane of Uganda, Africa: (Balearica regulorum gibbericeps)
In this post, learn about the crested crane of Uganda.
Facts include population, diet, threats, dancing habits, lifespan, and more. The Crested Crane (a subspecies of the east African Grey Crowned Crane) is a majestic but obscure bird that few people know about. Its light blue eyes, bright red neck, and particularly interesting plumage on its head make it an instant fascination for many people when first discovering it. 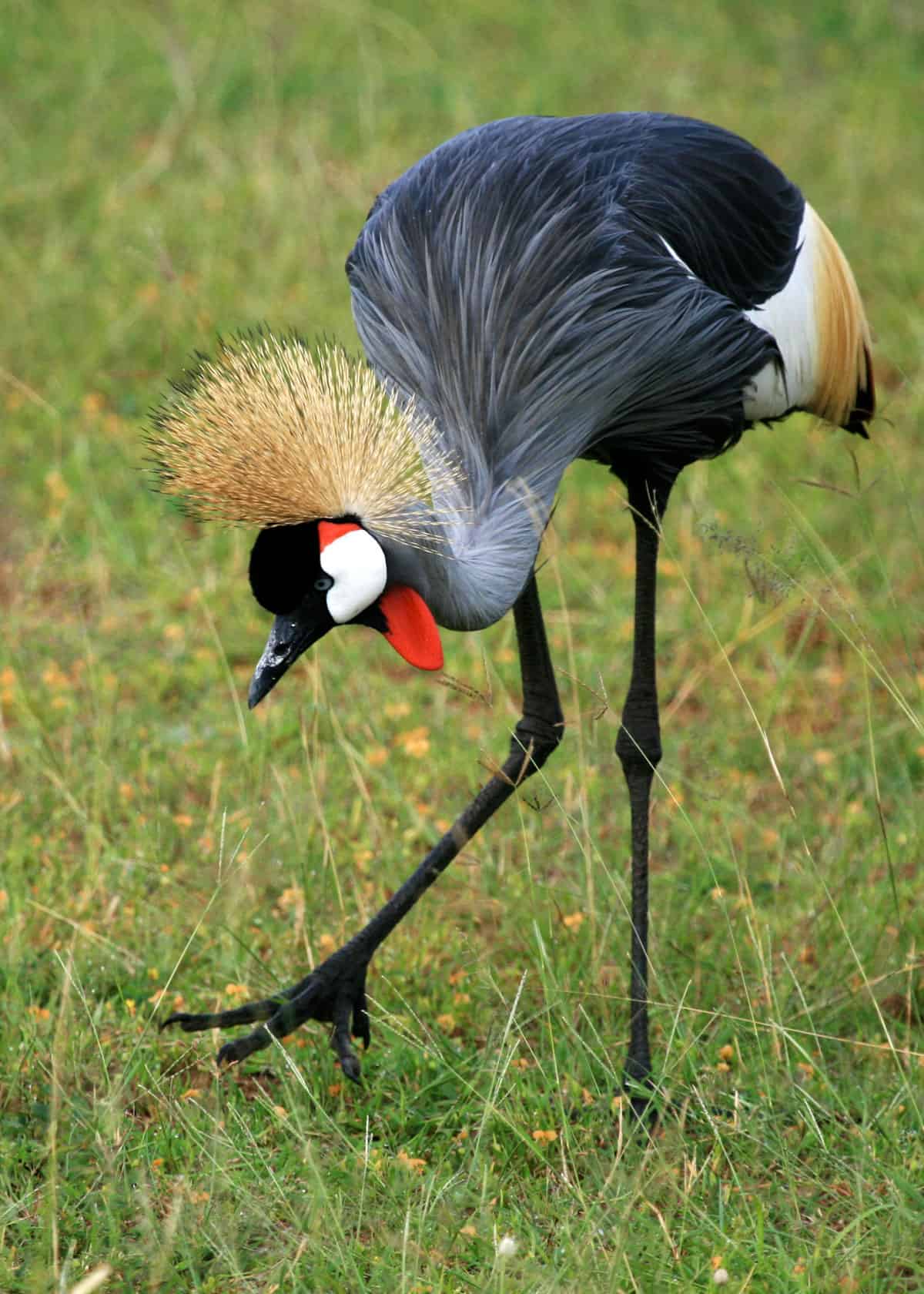 1. National Bird of Uganda
The Crested Crane is the national bird of an African Nation Uganda. It appears on Uganda’s National flag and coat of arms and can be found abundantly near the country’s many lakes and rivers that create fertile marshes rich with wildlife.
Uganda is abundant with wet, flat marsh and grassland these birds love, and the bird has become a symbol closely tied to the nation of Uganda.

2. Only Some Migrate
Although grey crowned cranes live throughout almost all of Africa some of them live far north in the arid Sahara desert. These birds will often migrate south for portions of the year to escape the hottest and driest months of the desert. They join their more sedentary cousins in Uganda and Kenya who live near rivers and lakes. The marshes and flat grasslands offer the birds everything they love in a habitat. High trees to build safe nests away from the reach of predators, but still wet enough to have a reliable source of water. The birds already living in these areas tend to not migrate and simply stay in place throughout the year.

3. They are Endangered
The crested crane is a resilient animal and can still be found in abundance in some areas. However, its habitat is slowly being depleted. There is currently an issue with over usage of the water in the marshes and grasslands where they typically reside. This means the areas are being dried up to water fields of crops. This has caused the crested crane population to decline around 65,000 and the bird has been designated as “endangered”.

4. Their Scientific Name is Balearica Regulorum Gibbericeps
This means that their species is “regulorum” and they belong to the genus “Balearica”. Balearica is a genus of birds that includes two distinct forms of crested cranes, both of which come from Africa. The crested crane has a subspecies of “gibbericeps”.
Grey-Crowned Crane: Balearica regulorum (more common species)
Crested Crane: Balearica regulorum gibbericeps (native to Uganda and the Democratic Republic of the Congo). The birds belonging to the Balearica genus are special. However, in that they are the only cranes to nest in trees. The Grey-Crowned Crane is the more common of the two species within the Balearica genus.

5. They Are Omnivores
The African Crested Crane falls under the category of “omnivore”, meaning that like humans, they can eat a combination of both meat and plants. Like most omnivorous birds the Crested Crane eats a mix of leaves and seeds from a variety of plants, as well as insects, worms, and frogs. They have also been seen eating small fish, snakes, and various aquatic eggs.

6. They Were Considered the Same Species as Grey-Crowned Crane
The other species in the aforementioned genus of Balearica is called the Grey-Crowned Crane, and they are so similar to the Crested Crane that until relatively recently they were considered the same species!. Whether these two birds should be categorized as distinct species or whether they were simply varying colorations of the same bird was a hot topic in the taxonomy world until scientists were able to definitively prove that they have enough genetic difference to each have their own species.

7. They use Cattle as Cover
It is not uncommon to find large groups of these cranes clustered together amidst a large group of cattle. This is something they’ve actually learned to do to prevent predators from being able to approach them as easily. Most of the predators that hunt birds in the African continent are dog size or smaller, so if the birds position themselves amongst a herd of large animals they can find protection.

8. Hunted Upon by Dogs
The African Crested Crane is well adapted to avoid predators. Instincts to nest in tall trees and take cover amongst herds of grazing cattle mean that they don’t find themselves becoming dinner all too often. Domestic dogs, however, can pose a real threat to the birds when on the ground.

9. They Love to Dance
The Grey-Crowned Crane has a breeding display that involves an elaborate dance with various jumping and bows. This is not uncommon for birds, however, the Crested Crane is known to dance year-round. They can be seen dancing at any time of the year, including non-breeding periods. Young birds are also often seen joining in the dancing, meaning these birds love to dance!

10. Identified by Their Distinct Call
One of the features of the crested crane that caused it to be given a separate species designation from the Black-Crowned Crane is its distinct call. Most cranes make what sounds like a gobbling noise, like a turkey. This particular breed, however, makes more of a honking noise, not entirely unlike that of geese.

11. Some People Consider Them Pests
While most pests are not nearly as beautiful as the African Crested Crane, many people in Uganda and elsewhere in Africa still consider the bird to be a problem. The cranes have a tendency to wind up grazing on farmland, where they can potentially do a lot of damage to crops and harm the livelihood of farmers and villagers. The cranes have been seen clumsily uprooting seedlings and fields while searching for food.

12. They’re Important for a Balanced Ecosystem
Almost all animals fulfill an important role in the ecosystem in which they live, and these cranes are no exception. One role they are believed to have in the ecosystem is distributing seeds. Since seeds are a major staple of their diet they spread the seeds in their droppings, inadvertently carrying them elsewhere so the foliage can spread. The cranes also serve to keep populations of bugs in check by eating them wherever they go.

13. They Have a Wingspan of up to 6.5 Feet
Cranes are some of the tallest birds out there, and the Crested Crane stands at over 3 feet (or 1 meter) tall and from wing tip to wing tip can measure over 6 feet (2 meters)! Despite having wings that are wider than most people are tall, these cranes only weigh a meager 7.7 pounds. Their hollowed out honeycomb-like bones also help to keep their weight down. This allows them to be light enough to take flight.

14. They Live up to 22 Years
While this may not be that long of a time for a human to live, that’s an incredibly long time for a bird to live in the wild. The average life of a songbird in the wild is a mere two years.
This means that these cranes are living eleven times longer on average than most birds in the wild. This is at least partly due to their territorial nesting habits preventing them from falling prey and suffering an early demise.

15. They Hatch in 30 Days and Reach Maturity in 3 Years
African Crested Cranes typically lay between 2 and 4 eggs in a clutch, and the eggs are ready to hatch in about 30 days. They are then ready to breed when they reach 3 years of age, which given their long life-span is promising for researchers looking into repairing the bird’s ecosystem and getting their population back to normal. They have plenty of years to find a mate and get the species out of the endangered category.

16. They Stay With Their Partner for Life
Crested Cranes practice what is called “monogamy” meaning that once they find a partner they will remain with that same breeding partner for life. They form pair bonds while they are young and will remain with the bird they bond to for the rest of their lives, breeding together each year and raising their young together. The advantage of this adaptation is not entirely understood, but it is cute.

When one thinks of Uganda's adventure Capital Jinja, as a tourist destination, lots of activities come to mind; Bungee jumping,

Best things to do in Kenya

Tanzania announces park fee and concession fee increases for 2021 Visitors to Tanzania’s national parks can, from the 01st of