Visitors to Tanzania’s national parks can, from the 01st of July 2021, expect substantial park fee and concession fee increases following the announcement by the Ministry of Natural Resources and Tourism in August this year. 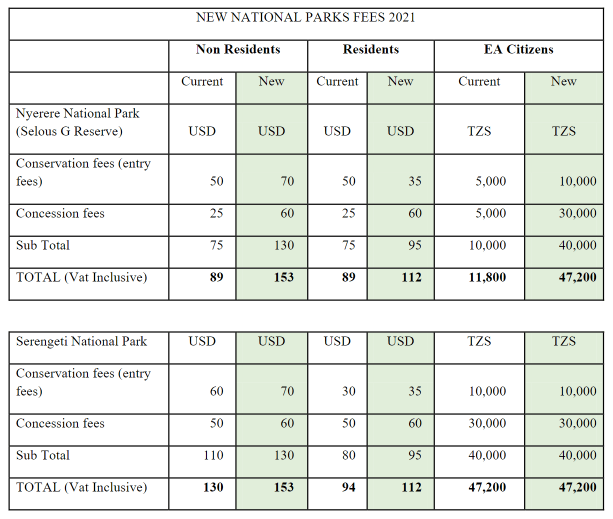 The new fee structure is published above and below and intending travellers and tour agencies should consult with their hotel groups and safari operators in Tanzania about what impact this will have on already quoted prices for safaris.
East Africans planning to visit the Selous Game Reserve, renamed into Nyerere National Park, can expect a more than fourfold increase in fees from July next year while residents of Tanzania will face an increase of nearly 26 per cent. Non-resident visitors to the Selous will face the highest increase with nearly 72 per cent.

For the Serengeti National Park while fees for East African visitors remain the same at 47.200 TShs but foreign residents in Tanzania have to pay some 19 per cent more to enter the park. Foreign non-resident visitors face an increase of 17.6 per cent, a combination of raised park entrance and concession fees the hotels and lodges have to pay including VAT.