The Rwenzori Mountains National Park covers nearly 100,000 ha in western Uganda and comprises of the main part of the Rwenzori mountain ranges which includes Africa’s third highest peak (Margherita: 5,109 m). It is among Uganda’s 10 National Parks that attracts mostly Mountaineering travellers that select to visit Uganda for mountain trekking tours 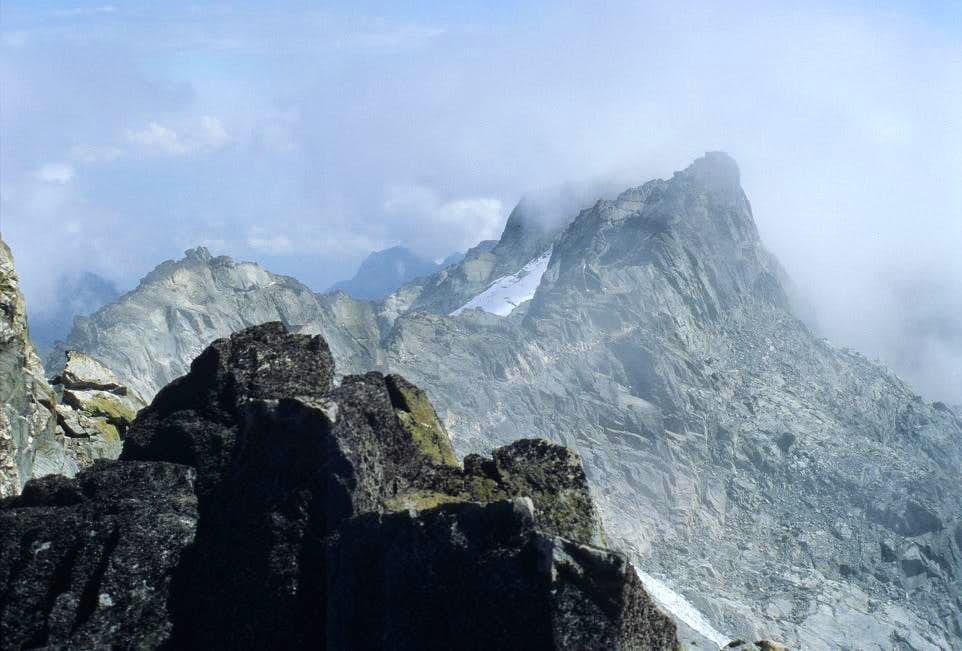 Uganda’s National Parks are managed by Uganda Wildlife Authority (UWA) which is a corporate body created by the act of parliament by 2000 not forgetting that Rwenzori Mountains national park is among the protected areas for the conservation of the flora and Fauna with over 400 species of birds.
The Top visited national parks in Uganda are Bwindi impenetrable forest national park & Mgahinga National park that host the mountain gorillas which are only found in Uganda, Rwanda and DR Congo. While Planning your  Rwenzori Trekking experience in Uganda requires you to know more information about the park.

The Rwenzori Mountain ranges which includes Africa’s third highest peak  Margherita: 5,109 m is dreamt of by any Rwenzori trekking travelers or safari planners planning to explore Rwenzori mountains national park. The region’s glaciers, waterfalls, and lakes make it one of Africa’s most beautiful alpine areas to visit when planning a summer vacation in Africa with mountaineering as the main activity.

Rwenzori National Park has many natural habitats of endangered species and a rich and unusual flora comprising, among other species, the giant heather. 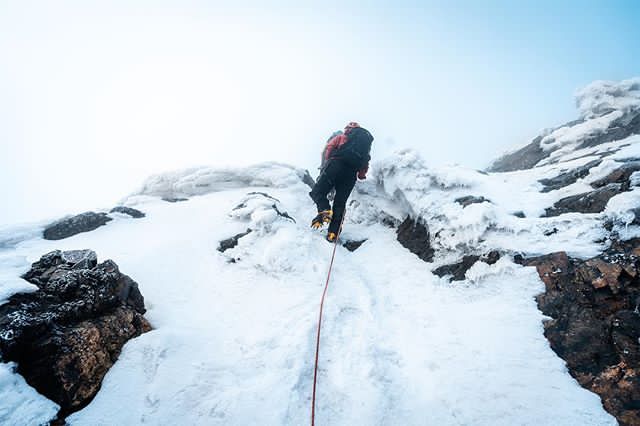 The Rwenzori Mountains National Park provides stunning views of the glacier and snow-capped mountains just kilometres from the equator, where it is contiguous with the Virunga National Park in the Democratic Republic of Congo (DRC). Having the third highest mountain in Africa at 5,109 m (after Kilimanjaro and Mount Kenya), the Park includes a much larger alpine area than either, covering an area of 99,600 ha of which 70% lies at over 2,500 m in height.

The Rwenzori Mountains are the highest and most permanent sources of the River Nile and constitute a vital water catchment. Their multitude of fast-flowing rivers, magnificent waterfalls, and stratified vegetation make the property exceptionally scenic and beautiful.

The mountains are well-known for their unique alpine flora which includes many species endemic to the Albertine Rift in the higher altitude zones including giant heathers, groundsels and lobelias. The Park also supplies local communities with various wild resources and is an important cultural heritage.

Mount Stanley which is the tallest mountain has several summits whereby the highest point is Margherita peak. As you hike to these mountains, the vegetation keeps changing in relation to the altitude.
Vegetation Zones of Rwenzori Mountains
There are various Vegetation covers that are found on the Rwenzori Mountains; these can be experienced by the trekkers when hiking to the top of the mountains of the moon.
The Rwenzori Mountains National Park is known for various vegetation, ranging from tropical rainforest through alpine meadows to snow. The range supports its own species and varieties of giant groundsel and giant lobelia and even has a 6 metres tall heather covered in moss that lives on one of its peaks. 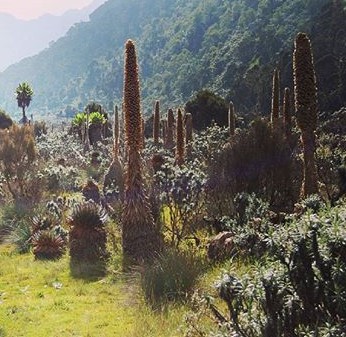 various Vegetation covers that are found on the Rwenzori Mountains; these can be experienced by the trekkers when hiking to the top of the mountains of the moon.

The montane forest
This vegetation lies between 1800 – 2500 meters above sea level. The tree size is moderate and the forest canopy seems to be broken. The common trees in this area include; the yellow wood tree, red stinkwood, podocarpus milanjianus, Symphonia globulifera which has waxy red flowers, vernonia adolfi-friderici. The wild banana, tree ferns, begonia, and balasms among others.

Bamboo Zone
This lies between 2500 -3000 meters on gentle slopes with good soil. The ground is always covered by thick litter of bamboo leaves. On steep and rocky slopes the bamboo is replaced by tangled undergrowth consisting of an Acanthus-type shrub, Mimulopsis ellioti.

A giant lobelia, lobelia gibberoa, grows in wet and swampy places. Giant heathers, philippia johnstonii and Erica kingaensis grow on narrow ridges. Helichrysum everlastings begin to appear in this zone. The bamboo flowers at intervals of about thirty years. Some of the trees in montane zone as well grow among the bamboo and undergrowth some of which include; hagenia abyssinica (a spreading tree with yellow flowers), podocarpus milanjianus, Dombeya sp, Afrocrania volkensii, Maesa lanceolata, and Dracaena aframontana.

Shrubs and herbaceous plants are so many some of which include the Rwenzori blackberry, tree fans, and crimson flowers among others.

Heather zone
The heather zone lies between 3,000 – 4,000 metres and the heather forest only grows where the soil is poor, on ridge tops, rocky and moderately boggy places.  The tree stems and the ground are covered in thick Sphagnum moss: branches are draped in Usnea beard lichens.

Some of the plants in this zone include; the coral pink ground orchid, Disa stairsii, and a red and mauve balsam, impatiens runsorrensis. There are many philippia trimera and Erica kingaensis tree heathers, which occasionally produces pink flowers. The valleys are covered with huge bogs that are almost fully occupied by carex runsorrensis which grows in tussocks. 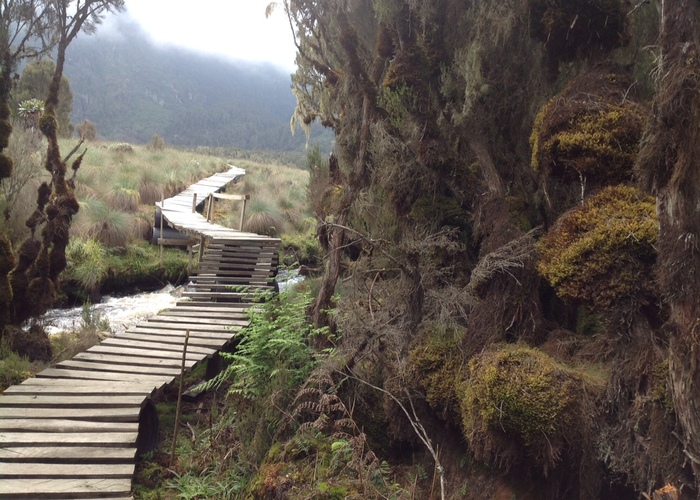 Between the tussocks, the ground is covered with Sphagnum moss and the fine lobelia can be seen. On well-drained slopes, there is mixed woodland consisting of small shrubby trees with rhododendron like leaves among others. Groundsel trees and lobelias are found in this zone. The undergrowth consists of everlasting flowers and moss.

Conservation
The park is owned by the Ugandan government through Uganda National Parks. It is protected, although extraction may be sanctioned by a board of trustees. Kasese, 437 km (260 mi) west of Uganda’s capital Kampala, is the gateway to the park.

The central circuit Trail
This Rwenzori Central Circuit is not challenging as the Kilembe Trail, This trail is the traditional and the oldest within the national park that has been used by various trekkers who visited Rwenzori before 2009. It’s managed by Rwenzori Mountaineering services with all its treks starting from Nyakalengija,22 Km from Kasese off the Fort portal Road.

There is a campsite and safe parking near the park head office. From Nyakalengija, it’s  10Km, Just from the trailhead at the Mihunga; the route raises the Bujuku Valley via Nyabitaba for the acclimatization before arriving at the peaks. Where you will join the central circuit after the Bujuku that passes the Scott Elliot as well as a fresh field that goes through the Mubuku Valley. It’s the only trail that can make 7 days Rwenzori trek top the Rwenzori mountains.

Kilembe Trail
The recent one that was opened in 2009,  Kilembe trail that rises in the southern slopes of the Rwenzori from a trailhead at the Kilembe just near the town of Kasese. This route is along the Nyamwamba Valley that goes through the glacier lakes and the spectacular viewpoints before joining the central circuit at Lake Kitandara. The standard route also shows Mount Baker has got scenery that makes shorter treks.

Mahoma trail
Ascending from Nyakalengija in Mahoma trail walking through the rainforests along the Kyambogho ride where Mahoma offers you an opportunity to have a scenic view of the Mubuku valley and the Rwenzori Mountains.

As you move, you will expect s to see blue monkeys, colobus monkeys, some birds like the Rwenzori Turaco, three-horned chameleons. Having a long night from Omuka Kizza, you continue with the trail as moving through the bamboo and heather forest, this is where you expect to see some forest elephants or their footprints in this area.

Rwenzori Mountains Cultural Trail
A short hiking adventure where you explore Mountain Rwenzori National Park and Culture of the people around the park. Therefore visiting culture tour and Nature walk to Rwenzori offers you an opportunity to see different trails with an experienced guide from the locals.

Enjoy the cold breeze of Rwenzori spiced by the roar of the boulder-filled River Mubuku where elated rewarding experience beings with eye-catching view of gigantic tree covered by the green canopy of giant ancient trees and plants through luxury  lovely forest.

Bulemba Ihandiro Cultural Trail
Visiting the numerous sites of great cultural value to the traditional occupants of the Rwenzori Mountains known as the Bakonzo people. Gazetted in 1991, the Rwenzori Mountains National Park is one of the UNESCO World Heritage Sites in Uganda (designated in 1994), covers an area of over 1000 square kilometers (386 square miles) and is popular for harboring Africa’s third-highest Mountain peak as well as numerous Lakes, waterfalls, and glaciers.

It is also a home to several mammal species such as forest elephants, hyraxes, primates like black and white colobus monkeys and L’Hoest’s monkeys and many others as well as several bird species including the Rwenzori Turaco, the Rwenzori batis and the Archer’s Robin-chat among others…

Recommended Tours for Rwenzori Trekking
Most travellers that select to visit Uganda mainly the Rwenzori mountains always want to add in extra safari activities that are enjoyed while in Uganda since the trips are done once with lifetime memories: It is worth to add extra activities in one safari holiday to Uganda since they are connected and near to each other. Among these are gorilla trekking, Wildlife Safaris, Chimpanzee Tracking & the Famous Rwenzori trek (14 days Uganda rwenzori mountain climb and gorillatrekking).